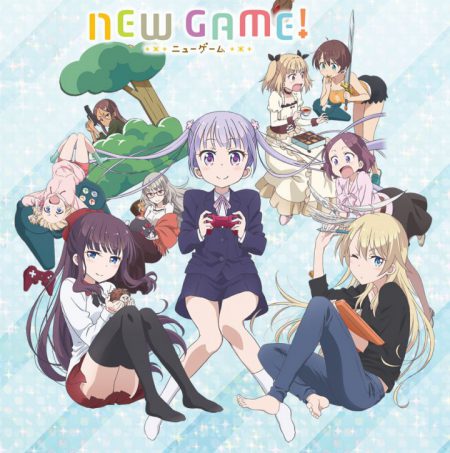 So a few days ago while checking my Twitter feed, Crunchyroll posted this –

The post has a 45 second clip from the show New Game. At the time I encountered it, it had almost 100 retweets and close to 400 likes. Out of curiosity I watched the clip. What I saw was… something.

What had I just watched?

I pondered this for a moment – a straight 45 seconds of two girls walking down the street calling each other cute and then acting embarrassed and modest about being called cute. Was that it? Is this supposed to make me want to watch the show? This saccharine clip existed without context, character, or really any purpose. All icing and no cake. I can’t believe people would get anything from the clip.

But maybe I was approaching this from the wrong angle.

When I cut my teeth on anime it was a different time, and Japanese animation was a subset of the existing American science-fiction/fantasy fandom. So my expectations are wildly different than subsequent generations. I thought about what my “icing” would be – mecha fighting in space, two martial artists using kewl powerz, ancient warriors crossing blades at dusk. I realized that if the clip had featured, say, a criss-crossing laser battle with streaking missiles and detailed mecha designs I wouldn’t have needed much context to enjoy it. I would have just taken it at face value and excitedly searched for more. I’d have seen that plate of icing an devoured it, probably scraping the plate while I did so.

So what accounts for this change of taste? Why do modern fans enjoy two girls talking about nothing and it does nothing for me?

At first I thought it maybe have just been an issue of age. I’m little more than a cranky old man, shaking my cane at passing youngsters. Kids these days, or back when I was a young man, and rabble rabble babble blergha. That sort of thing. But I don’t think that is the entire story. Certainly, 11-year old Grant would not have liked the above clip any more than currently-ancient-Grant did.

Is it that tastes have change radically? Perhaps these dern youngins just don’t know how to connect with the sort of genres I care for. Growing up in he shadow of the Cold War does things to one’s mind, and maybe the current social context gives them a different set of experiences to pull from. Still, I think that may only be partially true. Sure, the current crop of fandom is a lot different than I am or was, but when I look at the top lists for shows on Crunchyroll the top three are all shonen fighting shows – Naruto, One Piece, and Jojo’s – and the fourth slot is the new Berserk, which has been a staple in the medium for years.

I think the truth of the matter is that the fandom is larger and a lot more diverse. Simply put, anime has always been all of the things it is now, but the proportions are different (i.e. less mecha, more slice of life) and the sheer breadth of shows is greater than ever before. It’s not that we exist in an age where everyone is watching 45-second New Game clips and going gaga over moe eyes, it’s that we live in an age where there is such an incredible amount of content that there exists a fandom for, well, everything.

So while some things have not changed, and some things perhaps too much for my taste, at the end of the day anime is probably better for the diversity. Choice tends to work in everyone’s favor. So no, I will never be swayed by sugary sweet clips, but if someone else is… well, more power to them. To paraphrase a famous line that helped someone else keep their head on their shoulders, “Let them eat icing.”